A Report on - Guest Lecture by Dr. Ivory Lyons on Slavery in Americas on 16th June 2014


On a Monday morning, Dr. Ivory Lyons, Professor from University of Mount Union, Ohio, brimming with energy addressed the English Honours class on slavery in Americas. He embarked upon a journey to trace this practice called The Atlantic Slave Trade, from 1500’s to the 1850’s. With the aid of various maps, he vividly pointed out to the tiresome journey undertaken by the captured Africans, Triangle Trade.

The practice of indentured servitude enabled the colonizer to officially conduct trade without disobeying the Christian belief. At this point in history the whites and blacks worked together under the contract. These captured immigrants were then sent to the lands with the help of canoes. These canoes were overcrowded and lacked basic amenities. Due to this neglect, mortality rate in this form of transportation increased tremendously. But those who survived guaranteed a healthy profit for the slave traders. They were then sold off in the markets to the highest bidder. The “best physical” condition fared a handsome price. The treatment meted out to these captured Africans was worse than that of animals.

Photographs of Cape Coast Castle and Elmina Castle brought to life the maltreatment and atrocities committed. These castles have dungeons where the Africans were kept by captors to await embarkment. The females were kept separately, away from both man and child. The tribes were also not allowed to stay together in order to prevent any feelings of solidarity or so to say humanness. “The Doors of No Return” allowed them to enter the ships that took them away forever. 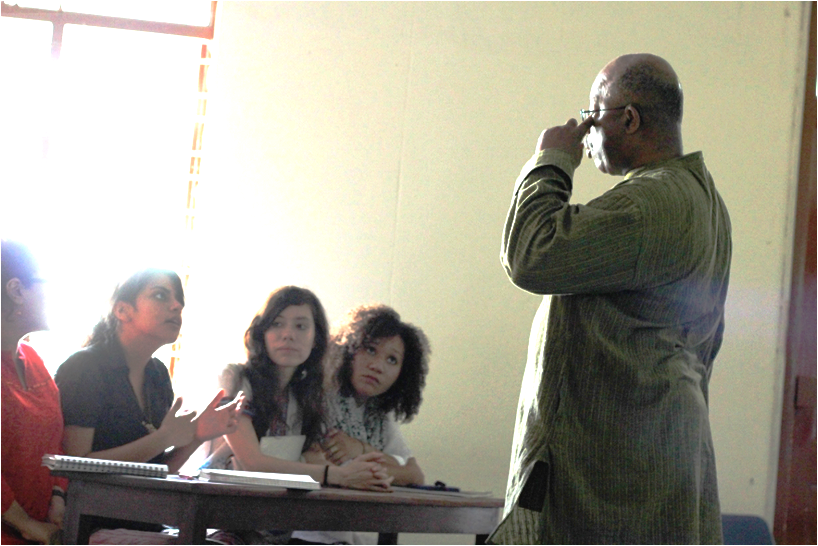 Dr. Ivory Lyons shared many personal experiences and photographs from his field study to these castles. Every square inch – from the kitchen, the slave quarters to the ‘Big house’ is a reminder of the slave trade and the trauma attached to it. To say that the class took away significant lessons is an understatement. His oration and passion made this lecture a memorable one. He represented the third generation that has learned to take a more objetecive prespective and explore the past. As a part of our paper- Colonial and Postcolonial Studies, this lecture provided an important insight into this practice outside the Indian subcontinent. Dr. Ivory Lyons recited three poems for the class- ‘Mother to Son’ by Langston Hughes, ‘Yet Do I Marvel’ by Countee Cullen and ‘Dialect’ from ‘When Malindy Sings’ by Paul Lawrence Dunbar. ‘Dialect’ was performed by Dr. Lyons accompanied by his student from Mount Union, with an almost unbelievable sincerity that left the audience mesmerized.

"You can be good. Do not doubt that even for a second.”

He concluded the gathering with this belief.
Posted by Christ University at 23:38