The II year BSc (PME and CME) students had organized an Awareness Campaign “i2R”, under the guidance of faculty members from the Department of Physics and Electronics on Wednesday, 6 April 2022 in the pathway, Central campus from 11am to 2pm. The themes for the campaign were, Save Energy and E-waste & its management.
The objective of the campaign was to enable students to describe the concept and create an awareness among the students from science and other deaneries about the energy related issues, e - waste hazards and its effective management. There were a total of 110 students grouped into 36 teams, they prepared innovative charts, posters and brought sample products, explained the theme to the visitors during the campaign.
The campaign helped the participating teams to enjoy new learning method by sharing information about effective e-waste management, renewable energy sources. The visitors received a lot of useful information about various topics by interacting with the team members.
The department sincerely thanks the management of CHRIST (Deemed to be University) for providing the opportunity and support to organize such a socially relevant campaign in the campus. 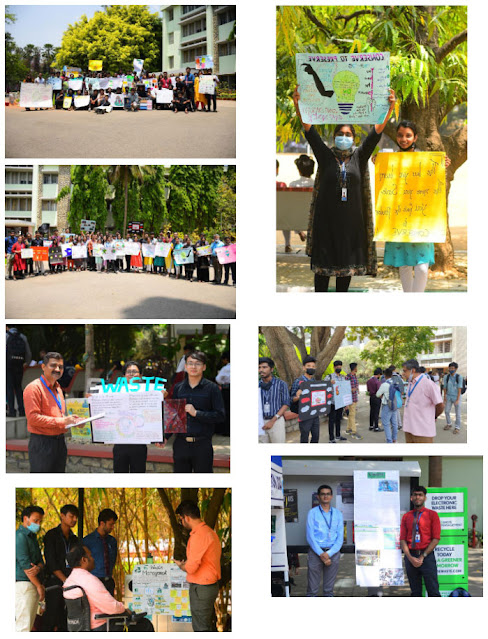 The Annual Electronics Project Exhibition was organized by the Department of Physics and Electronics on 27 April, between 12 to 4pm in the Pathway of Bangalore Central Campus. The objective of holding this exhibition is to provide a platform for the final year students to explain the project work carried out by them and demonstrate its working to the visitors thereby promoting the learning process with hands-on experience.

The exhibition was organized by the B.Sc. final year students of both PME and CME classes as a part of their VI semester project work under the guidance of the faculty members of the department. There were 138 students with a total of 52 working projects on display during the event. The students enthusiastically demonstrated the working of their projects using actual circuit and charts to the visitors.

Dr. George Thomas C, Dean, School of Sciences visited the exhibition and encouraged the students by interacting with the students. The students from other classes visited the exhibition and interacted with the senior students. The exhibition succeeded in giving an overview of practical applications of electronics in various fields of day-to-day life with a special attention to some of the problems with social relevance. The event motivated the electronics students from junior classes to take up the project work seriously and more enthusiastically to create innovative electronic gadgets.

All the faculty members of department of Physics and Electronics were present during the exhibition and provided guidance to the students for the successful execution of the program. Dr. Mukund N Naragund coordinated the event. The department sincerely thanks the management for providing all necessary support in successfully organizing the exhibition in the campus. 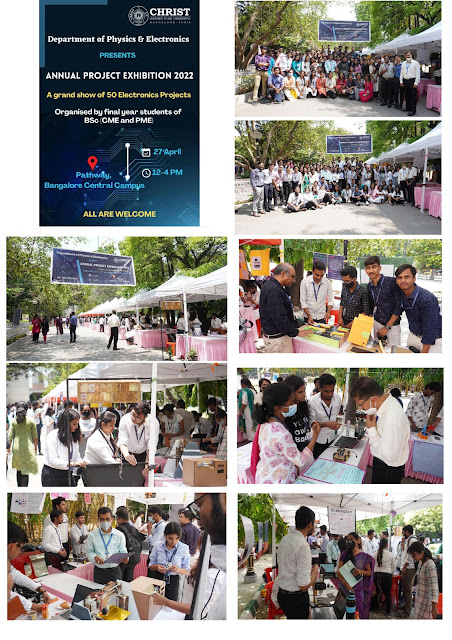 Talk on Developing Technical Skills for a Research Career

On 12 April 2022, the Physics and Electronics department had organised a talk by Santosh S., an alumnus (2015-18) of CHRIST (Deemed to be University), who is currently a research scholar at the University of Bonn, Germany.
Dr. Mukund N Naragund, faculty in charge of the event, briefed about the talk. Ms. Hamsaveena of 6PME introduced the speaker to audience with a welcome note.
The main focus of the talk was the emerging field of quantum technology and the skills one would need to pursue this discipline. Santosh S. first described and explained the four fields that lie under quantum technology, quantum metrology, quantum computation, quantum simulation, and quantum information. Quantum metrology is the study of quantum measurements, and is the most important field for studying fundamentals. Giving the example of a hydrogen atom, he also explained why there will be no more super symmetric particle to be discovered in the next five hundred years with our current technology.
The second example given was of atomic clocks, and how a research paper described how precise clocks allowed for the resolution of gravitational time dilation across a millimetre- scale atomic sample with an error of one second. Further, miniature atomic clocks will become gravimeters to measure the gravitational field, due to their precision.
Quantum computation was the next topic discussed, with a focus on how Google reached quantum supremacy in 2020, and how quantum computing varies from classical computing when it comes to certain functions such as the Grover search algorithm, its inverse method, finding the prime factors of numbers, and for drug creation.
After this, the discussion shifted to quantum simulation, and how in 1995, the Bose-Einstein condensate vacuum chamber was achieved, with a lithium fermionic condensate at 100nK temperature, and how the measured magnetism jumps between two d layers.
The last topic discussed in this part of the talk was quantum information, which is the distributing of entangled quantum states across a network. A cornerstone paper titled ‘A Single Quantum Cannot be Cloned’ was also discussed, along with Santosh S. recounting his experience in the field. He spoke of a network node called a stationary Qubit he is working on, and how his team had a world record in entanglement technology that until last year was unbroken. He also mentioned that he would be teaching a lecture on quantum technology in the coming future.
With this, the first part of the talk was complete, and Santosh S. moved to the second part, which was about the skills and tools required to get into the field of quantum technology. The most important qualities and skills required are: interest, funding, mechanical engineering, computer programming, photonics, and electronics. He went on to explain how the 6 semesters of electronics he learnt during his Bachelor’s helped him immensely in his current field of study. The basics of electronics taught in the first semester helped in building circuits, the study of op-amps in the second semester was instrumental in control theory and building control loops, and the digital electronics of the third semester was vital for device control and time precision. Moreover, the study of antennas, microwaves, and transmission lines in the fourth semester aided in Qubit control, microcontrollers and microprocessors in the fifth semester aided in the main experiment control, and the study of FPGA in the sixth semester was the most important of all, as it can be used to control and simulate all of the above.
When talking about how to fill one’s toolbox with the required skills, Santosh S. mentioned the following: learning plotting, simulation, and error calculation on Python, mastering LaTeX, soldering, programming on FPGA, DSP, and Raspberry Pi, and learning to read papers and datasheets, and extracting information from them. He also mentioned the necessity of being cautious to get into the field, but to not be scared, and that the most important skill one can learn is how to learn.
On the behest of the faculty, Santosh S. shared some of his experiences of studying in the university, and shared his email address for further discussions or doubts.
About 120 students from VI sem PCM and PME classes attended the session. The faculty members from the department were also present and interacted with Mr. Santosh.
Ms. Sanithi John of 6 PME proposed vote of thanks. 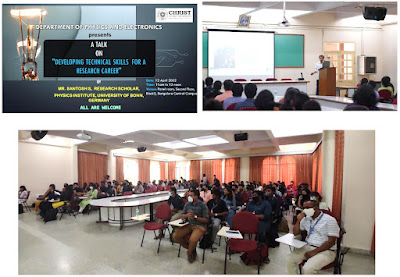 A webinar was organized by the department of Physics and Electronics as a part of career guidance initiative involving alumni and industry experts on Thursday 28 July 2022 using WebEx platform.

The resource person was, Mr. Edwin Jose, an alumnus of the department (B.Sc. PME student 2015 – 18 batch) and currently working as a Chief Technological Officer in an Edtech company hailabs.ai.

Dr. Mukund N Naragund, event coordinator, introduced the concept of bringing back the alumni to the campus through the tech-talks and career guidance sessions to the participants. Ms. Antika Burman of 5  CME introduced the resource person and also presented a welcome speech. Dr. Paul K T, Head of the  department shared his thoughts about the event and recalled his association with Mr. Edwin Jose. Prof.  Benny Sebastian also shared his experience with Mr. Edwin as a mentor for student council activities.

Mr. Edwin Jose presented a talk – The road not taken: career Journey in a very enthusiastic way sharing his experience as a student at CHRIST. He explained several useful tips on how to improve the self confidence and interpersonal skills by participating in various cocurricular and extra-curricular activities. He elaborated on how to go ahead with the career plan leading either into job or into research by quoting his own efforts and achievements. He interacted with the students during the session. It was a very informative and motivating talk for the current batch of students. The participants shared their happiness and appreciation for the talk as well as for the initiative from the department through the feedback form shared with them by the department immediately after the webinar.

Ms. Sowjanya of 5 PME proposed vote of thanks.

Dean, School of Sciences, Dr. George Thomas, Head, Department of Physics and Electronics, Dr. Paul K T, Prof. Benny Sebastian, all the faculty members of the department and about 130 students participated in the webinar. The department wishes to thank the management for providing the opportunity for  conducting the webinar. 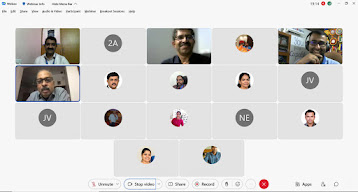