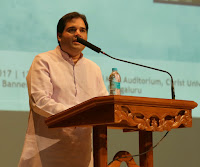 On the 6th of July, Uni-Verse, the poetry club of the Christ University BGR campus was inaugurated amongst a small gathering of passionate students and teachers. The event took place after college, from 3:40pm, for an hour in room 409. Jacqueline Williams of Second English Honors was the emcee of the event. The occasion was graced by accomplished poet Bidyut Bhusan Jena, who is also an Assistant Professor at the main campus of Christ University.

His address left the audience in awe of him, his poetry and his almost magical ability to capture the attention of the listener. “Poetry marks the homecoming of the soul” he said, and it was to the soul that he spoke with his words that came out of his mouth like poetry. Every other line a beautiful quote by a beloved poet. In the interactive session he was questioned about his preference of the words of others over his own to convey his thoughts. With the eloquence only a poet could have he answered that question. He said that the greats have left behind for us a body of work, of unfinished meanings and that it is up to us to continue the unfinished, to make sure that history is picked up and to make sure the past is in the present and in the future. He spoke extensively on the importance of memories and love. How “poetry eases the broken strings of your heart”.
A very unique thought that he extended was that poetry is not heard, it is overheard. It’s the personal thoughts of the poets that the reader or the listener peers into. A world beyond their own.
He talked about how to him poetry doesn't lie in the complexity of the words used but the images you create with them. He then recited two of his pieces; the room was at that moment filled with poets creating vivid images out of his words in their minds.
The address and interactive session was followed by recitals by two of the coordinators of the club, Merve Kucukzoroglu from First Journalism Honors and Sre Ratha from Second Journalism Honors. Both of them received by thunderous applause and appreciation.
The audience was then briefed about the upcoming plans and events of the club and those interested were signed up at the venue.

Dr. Bidyut was kind enough to interact with all the students who had queries for him or simply wanted a one on one conversation with him. His presence, the enthusiasm of the coordinators, of both of the student body and the faculty and of course all the enthusiastic poets in the audience made this inauguration one that has successfully paved the path for young budding poets.

Guest Lecture on Supply Chain and Its Operations


Supply Chain and Its Operations
School of Business Studies and Social Sciences, Christ University, Bannergatta Campus organised a Guest lecture on 5th July 2017.The main objective of the guest lecture was to impart knowledge on logistics  and supply chain management as a part of strategy
The guest speaker of the day was Ms Pallavi Khandelwal Market lead at Zevenworld.com She has close to five years for experience in logistics and Supply Chain
It was an eye opener session which helped the students to get an insight about Supply Chain Management operations.  She highlighted the  increasing demand for qualified logistics professional in domestic & International  markets.The Speaker gave insight of  how supply chain principles and processes are critical to supporting and delivering services .She also discussed as  how goods availability (components and finished goods) must be coordinated with resources and expertise to meet a service demand.
The topic also covered the evolving  and maturing nature of services based businesses and basic understanding and awareness of how to market your skills and knowledge in Supply Chain management across multiple service based industries.