Two day National Seminar - Media Meet 2011 which was held on the 2nd and 3rd of September, began with an inauguralceremony at 9 30 AM, held in the auditorium. The ceremony began with the lighting of the lamp for which the dignitaries, Fr. Vice Chancellor, Mr. Krishnaswamy and the Chief Guest, Mr. Harish Bijoor,
Mr Harish Bijoor touched on the basics of advertising and explored the present, past as well its future with special refer- ence to the representation of men in Indian media over the years.
The different events that were held during the meet were Ad-Centric (paper presentation), Adzap (Ice breaker), Ad making (viral video competition), iQ (Quiz), Pitch it Right, workshops based on ad photography, social media marketing, print ads, audio visuals, etc.
The key event for media meet was the panel discussion held on 3rd September which was moderated by Prof Anil Pinto. The panelists for the evening were Ms.SnehaIype, Ms.Valerie Pinto, Mr.VikramSood, Mr. VimalParathsarathy and Mr.VipulThakkar.
The Battle of Creativity truly brought out the talents and skills of the participants and got together students from various parts of the country in a sprit of harmony and togetherness. 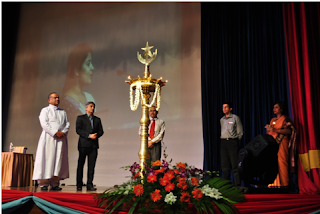 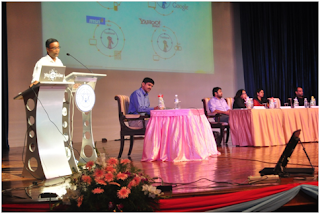 Media Conclave:
The seventh Media Conclave was held at the Ohio conference hall at 10 a.m. on September 10, 2011. Research papers were presented by the Traditional Media team under the guidance of Prof. Naresh Rao and in the presence of the guest of honor Mr. Chandan Nandy- Chief News Editor, The Deccan Herald, Bangalore, and other faculties of the Media Studies department of Christ University.
Students presented paper on topics like: Community radio- A key to rural development, The perception of colors in newspapers and Are ads on television more effective than ads in print?
Following the presentation, the guest lecture was delivered by Mr. Chandan Nandy who spoke about the changes in journalism over the years. He stressed on the point that newspapers should be open to all kinds of ideas, story ideas, and subject matter and so on, hence stressing that the news from rural regions should also be given importance. He also stressed that journalism cannot be taught in a class and so, students should be asked to do extensive field work.
Following the speech, Mr. Nandy along with Prof. Naresh Rao released special copies of the University news letter ‘Commix’ by the students of First M.S. Communication. 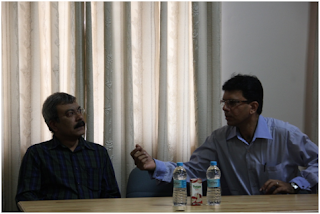 Transtalkies
On 9th September 2011, Transtalkies held the film screening of the Documentary film “Partners in crime” directed by Ms Paromita Vohra. Ms Paromita Vohra herself was present to present her film. Paromita Vohra is a documentary filmmaker and writer based in Mumbai whose films explore issues of politics, feminism, culture and desire.
Partners in Crime explores the grey horizons of copyright and culture in times when technology is changing the contours of the market. The film also  takes you through a story about art, crime, love and money which is running the piracy market be it a pirated DVD openly available of the pre released film or “inspiration” from old songs which is blended with modern orchestra and becomes a super hit.
The film was well made and it presented a serious topic with a little humor without diluting the importance of the issue, which was Piracy and ownership intellectual rights.
at September 20, 2011