'Red Bull Racing Can' event was held at Delhi on the 1st of October. Christ University Team  consisting of  Binoy John and Rahul Sharan emerged the winners in Bangalore among 90 other teams from Reputed Engineering Institutions such as MS Ramaiah Institute of Technology, P.E.S. Institute of Technology, Dayanand Sagar etc.
-
From there they moved to the national finals held at Delhi where they competed against 6 other teams from the rest of India including, Symbiosis Institute of Design, IIT - Delhi and SRM Institute of Technology Chennai. They won the National Finals and will now represent India and Christ University at the World Finals of the 'Red bull Racing Can' to be held at Milton Keynes , United Kingdom. 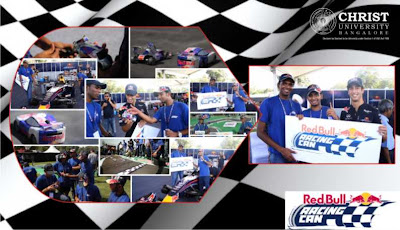 They are featured in the following publications:

Also been covered in other publications such as Deccan Herald and Autocar India.