Inaugural and Investiture Ceremony of the Psychology Association 2012-13

The inauguration and investiture ceremony of the Psychology Association was held on 2nd July, 2012 in the main auditorium, Christ University between 3 and 4 pm. The chief guest for the event was Dr. Nitin Shukla, a faculty member of Cadabams, Bangalore. The ceremony was also presided over by the Dean of Humanities and Social Sciences, Prof. Mallika Krishnaswamy, the H.O.D. of the Psychology department, Dr. Tony Sam George and the academic coordinator, Dr. Padma Kumari. The event started off with the lighting of the lamp and invocation song following which there was the welcome address by the HOD who welcomed the chief guest, the dean, the faculty and the student body and spoke of the importance of having an association to inculcate an interest in the field of psychology given it’s growing importance in today’s world. 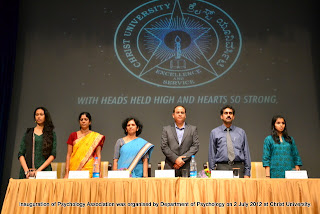 This was followed by the investiture ceremony during which the association members including the office bearers and the class representatives were appointed to their posts with badges by the HOD and the academic coordinator. Once, the office bearers were officially announced, the presidents of both the UG and PG department addressed the gathering. In the address, they introduced everyone to the Psychology Association, the annual fest ‘Silhouette’ and gave a brief idea as to what activities are conducted and encouraged the students to participate wholeheartedly in the activities conducted during the academic year. The secretaries of the UG and PG department went on to give a detailed description of the activities and competitions that would be conducted for both departments over the two semesters. The dean, Prof. Mallika Krishnaswamy, spoke to the audience about the importance of student participation and motivated the students and teachers alike. Dr. Nitin Shukla, a specialist in hypnotherapy, spoke to the student gathering about the importance of bringing together the psyche and psychology and the necessity for understanding the psyche in order to succeed in the field of psychology as we know it today.

The day also saw the presentation of certificates for the graduates of the diploma in Life Skills and Reproductive Health’. It was heartening to know that these students used their learning from the course to teach and help other students and adults alike both within and outside the country. The programme ended with the joint secretary of the UG department thanking the dignitaries and the audience for their support and encouragement. All in all, the ceremony promised a bright start to the year ahead. 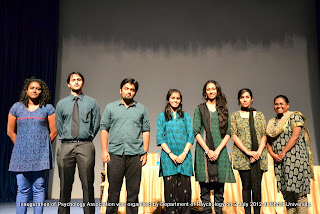