To commemorate the 13th anniversary of India’s victory in the Kargil War, the Department of Political Science had organized an Interactive Session with Col. MB Ravindranath, Commanding Officer of the 2nd Battalion Rajputana Rifles at the time of the Battle of Tololing in 1999. Also present were the present Commanding Officer of the unit, Col. Narender Singh, and some of the men who had fought the war alongside Col. Ravindranath. The 2nd Battalion Rajputana Rifles enjoys the distinction of having received several decorations for bravery and national service, including 1 Param Vir Chakra, 1 Ashok Chakra, 10 Maha Vir Chakras, 8 Kirti Chakras, 41 Vir Chakras, 25 Shaurya Chakras, 112 Sena Medals, 36 Vishisht Seva Medals, 2 Yudh Seva Medals, 85 Mention-in-Dispatches and 55 Arjun Awards. Col. Ravindranath himself has been a recipient of the Vir Chakra. 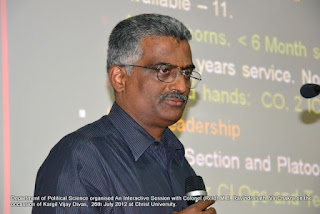 Col. MB Ravindranath, at the outset of his address on the significance of the Battle of Tololing, provided students with a brief introduction to the structure of the Indian Army and the role of the Infantry therein. He then outlined the political conditions prevailing between India and Pakistan before the War, and then narrowed his focus to the method and objective of the Pakistani offense in Kargil. With useful maps, charts and videos displayed via powerpoint, he explained the tactics and line of attack adopted by Pakistan towards cordoning off National Highway 1D, Leh to Srinagar, to cut off and isolate Kashmir. It was in this context that 2nd Battalion Rajputana Rifles was brought in to repel the enemy attack. 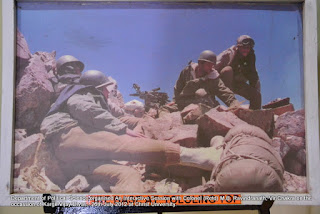 Col. Ravindranath explained the difficulties and challenges that the Indian Army faced in the task of foiling the enemy attack. The greatest tactical disadvantage that our men faced was that whereas the enemy soldiers had stationed themselves at higher mountain altitudes, Indian soldiers had to attack from below, in a terrain devoid of any natural cover. Hence, the Indian army could move and attack only at night, when visibility was severely limited. Added to this was the fact that his unit was undermanned and underequipped at the time of the sudden summons to battle. Also, his men had to rapidly move from the plains to an altitude of 6000 feet with no time to acclimatize. The unit also lacked senior officers at the time; however this was compensated by the competence of the Jawans.

The first great challenge was for 200 men to carry 17 tonnes of ammunition to the higher altitude within 6 nights. This was imperative because in mountainous terrain, artillery can provide only peripheral support and the air force is rendered ineffective. Col. Ravindranath shared the story of Uttam Singh, a carpenter, who insisted on helping the men carry ammunition to the top despite suffering from night blindness; his example inspired and lifted the spirits of the entire battalion.

Col. Ravindranath then took the audience through each motion of strategy execution while they listened with rapt attention. He concluded by praising his soldiers whose indomitable spirit helped the under supplied battalion to snatch victory from the jaws of defeat. During the vibrant audience interaction, he made an insightful remark when questioned about why India didn’t neutralize all enemy soldiers at Kargil: Quoting Sun Tzu he said, “An enemy must always be provided an escape route which serves as a distraction from his primary objective of combat. If the enemy knows that he can escape, only half his heart will be in the battle whereas the other half will be in the escape. If that escape route is denied to him, his entire focus will be drawn to the battle.” Hence, a battle is won not only physically, but also psychologically.

The session ended with concluding remarks by Col. Narender Singh, the present Commanding Officer of the Battalion. He stated that he was honoured to be holding the office previously commanded by Col. Ravindranath.  He then introduced to the audience each of his men who had fought at Kargil alongside Col. Ravindranath. The men were greeted by the audience with a standing ovation.

In response to a special request, the unit also kindly conceded to exhibit pictures that they had taken of the ground situation during the war, as well as the captured body-kit of an enemy soldier, including uniform, accessories, tools, arms and ammunition.