The film club is a venture of the Department of Psychology which aims at understanding the popular medium of cinema. It works towards introducing films as a powerful media to students and orients them of the emerging possibilities of interdisciplinary work in film and psychology. As part of the activities of the Film club, the documentary ‘Love, Hate and Everything in Between’ was screened on 23 September 2013 for the postgraduate and honours students of Psychology.Since the documentary’s completion in 2012, it has been shown in several international film festivals and has had special screenings, including the Royal Society of Arts and Action for Happiness in London and Roots of Empathy in Toronto. The documentary is an attempt to understand the origins of the emotion of empathy and unravel the mysteries of its continued presence despite violence and aggression in human society. It features interviews with neurologists, psychologists and researchers from related disciplines. 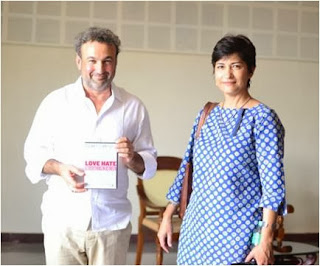 The film makers
The screening was followed by a panel discussion and an interactive session with themakers of the documentary.The panel consisted of Ms. Aasita Balifrom the Department of Media Studies,Mr. Alex Gabbay, a London-based documentary film maker for BBC and Al Jazeera and Ms. Sara Adhikari - research supervisor of the film, journalist  and  founder of the communications agency ‘Small Change’ based in Kolkata 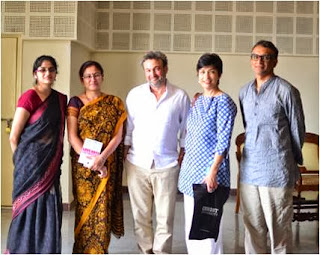 The panel discussion led to some insightful observations by Ms. Aasita Bali. She pointed out that films are a powerful text and the documentary in particular can be linked to various events that have happened in India, and that makes the documentary an important text for students of psychology. The interactive session with the audience involved someastute and perceptive questions and enlightening answers and comments on the concept of empathy,situations where being empathic is possible and when it is not and its role in understanding psychotic disorders. The session lasted for approximately an hour and left the participants with much critical reflection and food for thought.