Christ University Kannada Sangha brought out its unique recent publication "Matte bantu Shravana", on the occasion of "Kavidina" which celebrates the birthday of gifted Kannada poet D.R. Bendre.  "Matte bantu Shravana" is a collection of 131 best poems written by 96 poets. These were prize winning poems of "Dr. D.R Bendre kavitaa sparde", a state level poetry competition conducted for students by the Kannada Sangha of Christ University since 1982. The book was released by famous Kannada writer, critic, Devanoora Mahadeva.  During his speech  after releasing the book he said, new generation writers should follow the paths laid by old poets like Pampa, Vachanakaras,  Kumaravyasa, K.V Putappa and D.R Bendre and others. He called upon the students to start a new legacy with the old tendency without being parallel to the old. He spoke about how D.R Bendre lived and loved poetry. 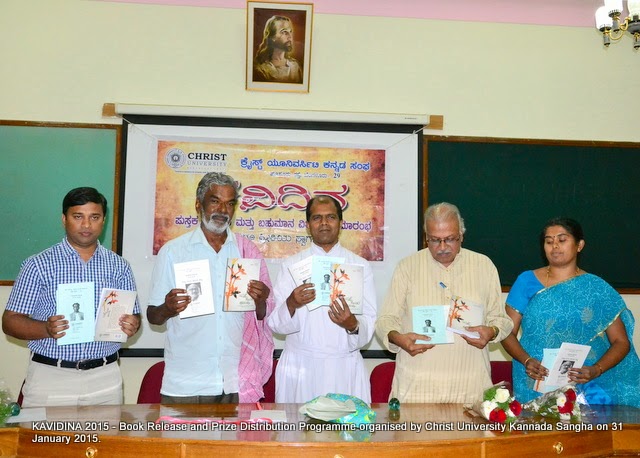 Reviewing the book, noted poet Tarini Subhadhayini said, poems in the book are as cool as breeze. It is a very difficult job to pick and choose the best among best poems. None of the poems fall under any of the new Kannada genres i.e. Navodaya, Navya, Bandaaya- Dalita etc. We find in the collection, the blend of ideas, styles of all genres, this is the specialty of the book, she said. Poems written by the students for around 3 decades give us the clear picture of the change in the ideologies, style in literature, she added.

Editor of the book Dr. Vikrama Visaji spoke about how Chi. Srinivaasaraju reached every nook and corner of the state by conducting poetry and essay writing competitions. This initiative of his, has nurtured lots of enthusiast, passionate young poets and writers. The only Kannada Organization that is very consistent in its programs is Christ University Kannada Sangha, he added.

H.S Venkateshmurthy, famous poet who was the Chief Guest of the function said, Christ University Kannada Sangha's publication brought good name and fame to the University. Many good established writers of today like Mogalli Ganesh, Abdhul Rashid, Nataraj Huliyar, and Kavita Rai among others give credit to Christ University Kannada Sangha for giving them a platform to showcase their talents and to express them. Most of the poems in the collection are interesting, intense and beautiful, he said. He complimented Christ University for bringing out such a good collection of poems. He also mentioned that Christ University is the best example for encouraging budding writers by creating a platform to express their spectrum of thoughts through writing.

Financial officer of Christ University Fr. Dr. Varghese who presided over the function said, this book is a treasure of 3 decades of good poetry writing. Students of this generation are not cultivating good habit and taste. He insisted the students to cultivate the habit of writing.