As a compulsory programme of B.Ed Curriculum, the teacher trainees are required to attend a two day Camp titled, ‘The Community Living Camp’. In this connection, The School of Education in collaboration with the Center for Social Action (CSA) organized a two day camp for the B.Ed students on 15 and 16 March, 2013. The objectives of the camps were: to promote dignity of labour, understand the importance of community living, develop social responsibility, develop social moral and cultural values, plan and execute community service and conserve natural resources.

The students were accompanied by two faculty members and CSA facilitators during the visit. Two buses were arranged to accommodate the students and the teachers. Everyone reported on time at the university campus and the buses departed from the college as per the schedule at 8:00AM. On reaching the destination, Yeldur, time was given to everyone to freshen up and settle down. This was followed by the Camp inauguration. Prof Prakasha G S of School of Education, Christ University gave the inaugural address in which he welcomed the teachers, CSA members and students. The members of CSA spoke about the objectives of the camp and the Do’s and Don’ts for the duration of the camp.

The inauguration was concluded by Dr Sumita Rao, School of Education, Christ University who was in charge of the camp gave a vote of thanks to all the panel members. Sumptuous lunch was served to everyone after the inauguration. Committees had been formed prior to the camp and students took turns to do different tasks during the camp. The village visit was scheduled after lunch where students had to visit four nearby villages and interact with school children and villagers. Students had been divided into four groups well in advance and the four groups, accompanied by faculty members, went to four different villages. The groups were first given an hour’s time to go to the schools there and interact and play with the children as well as teach them some basic values. An instantaneous connection was formed between the B.Ed students and the school children. Next, the groups went around the village and had casual interaction with the villagers, about their lifestyle, issues and concerns, education and livelihood. They also invited the people to come for a street play that was to follow. A street play was organized by each group in their respective villages that was aimed at creating awareness among the people.

At around 6:30PM, as scheduled, the street play began. A considerable amount of people assembled to watch the street play and as the play proceeded, the crowd further increased. Students as well as the villagers enjoyed the experience. After having achieved what they had set out for, the groups returned back to the base camp with satisfaction and smiles on their faces. Once all the four groups were back, a round of refreshment was arranged, followed by some fun and games that was again organized by the students themselves. An hour of fun games, entertainment and activities where everyone participated was relaxing. Even after a long day’s hectic schedule, students were full of enthusiasm. Dinner was served to everyone and then everyone retired to bed. In the breezy night, everyone had a sound sleep and woke up and got fresh in the morning at 6:00AM per the schedule. The morning began with everyone assembling for prayer and meditation. The cool climate and the prayer and meditation had a soothing effect and gave the day an ideal start. This was followed by a formal assembly. 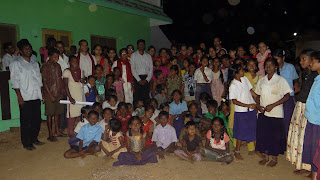 A round of walking around the camp area to get a whiff of fresh air and physical exercises gave everyone the much needed energy for the day. The students got to view the scenic beauty of natural, serene surroundings of the village that was free from crowd, smoke and traffic of the cities and was very much admired by all.  Breakfast was served for everyone and everyone again assembled to have a session of reflection and feedback of the previous day. Representatives from each group shared their experience and a short discussion was held regarding the same. This gave everyone a glimpse of what each group had experienced and the overall situation in the villages. It helped create awareness among the students about the present scenario and gave them a memorable experience. Finally, after formal thanksgiving, everyone departed at 10:00AM from Kolar. 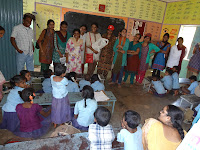 The Community Living Camp organized by the School of Education and the CSA was a successful one and gave the students an experience to take with them for life. It was a well organized camp with fun and learning where everyone co-operated and participated to make it a successful one.
at March 25, 2013