GBBC  is a four-day annual event aimed primarily at contributing to global data on bird database, but it also makes people aware of the birds around them and helps them understand bird behavior by observing them. It is a great opportunity to learn and at the same time contribute important data. Basically, the number of individuals of different species of birds seen or heard are counted and recorded at uniform time intervals and these checklists are uploaded onto the global platform ebird. This comes up with a proper account of bird diversity across the world. The GBBC is the time of the year, every bird enthusiast waits for, due to it being peak migration time, and it is an immensely fun event!

GBBC 2018 happened from February to 16-19 in Christ University Campus under the guidance of Dr P U Antoney. The members of the Green Army were the primary data collectors. The survey was conducted from 6:45 AM to 8:30 AM and 4:30 PM to 6:30 PM. Birds were identified through binoculars, camera and calls, the number of individuals were added on to the data sheet and the campus was divided into five areas and each group surveyed the respective area in the campus.51 different species of birds were identified during this time from our campus. A great increase in the number of species was observed when compared to last year. Chestnut-tailed Starling, Black- naped monarch and Green warbler were the new species identified in our campus. Brahminy Starling, Greenish warbler, Red wattled Lapwing were also part of the highlights of GBBC 2018. 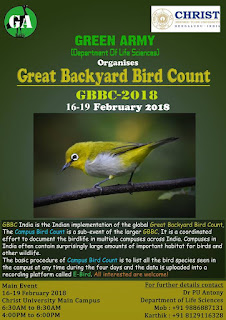 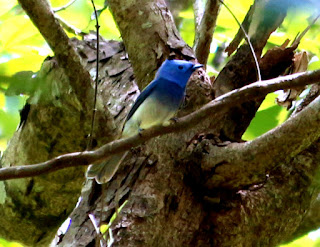