Chrizellenz 2014 – destination excellence achieved
Chrizellenz is a national level management fest held at institute of management, christ university, kengeri campus. It was incepted in the year 2009 and since then, the best minds from b-schools across the nation compete to test their business mettle. The event is famous for its creative challenging tasks, best in class hospitality and unlimited fun.

We had a spectacular two day buzz of enthusiastic participants on 21st and 22nd november 2014. It was filled with ideas, innovation, creativity, fun and enthusiasm contributed by the best minds from all across the country. The most notable parts of the entire fest were the creativity and artwork with the entire campus decorated with bee-hive themes and related elements. Participants were engaged in stimulating as well as fun events simultaneously.

Beehive, that’s how it all started. This theme was a beautiful element added to chrizellenz by navin, a student of mba general management. The bee hive is an emblem of the industry. It is a significant representation of the hard work, harmony, order and frugality of the people, and of the sweet results of their toil, union and intelligent cooperation. Working together during this early period, individuals contributed specialized talents and skills for building an integrated and well-planned community in a hostile environment. Community and individuality, created this persistent symbol.

Sponsors for the event were geckolife, manchahe.com and binco. Media partners for the fest were business standard and btv news.

Chrizellenz 2014 – destination excellence saw participation over 50 colleges, amongst which 30 were outstation colleges.  Around 600 students from different colleges participated in events conducted across two days. The flagship event which was the best manager event received participation from more than 30 teams who fiercely battled through 12 rounds for the ultimate title. B- plan event had participation of over 50 teams which brought out the entrepreneurial spirit within these young and budding minds. Other specialization events also had equally enthusiastic participation of 50 b-schools.

The first day began with an overwhelming response from various b-schools from participants pouring in to register and be enthralled by the events in store. It was then followed by a completely planned and coordinated schedule of events that were distributed into 9 categories – best manager, b-plan, b-quiz, csr, marketing, finance, operations, general management and hr. The day ended with breathtaking performances by first year christites and all participants thoroughly enjoying the entertainment. 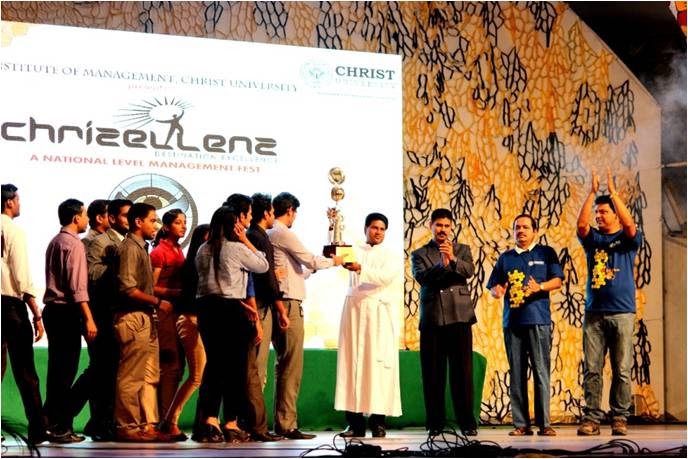 Institute of management, christ university had witnessed the highest number of footfalls this year and has made a benchmark regarding its college fests. The feedback of the participants was very positive and encouraging. Participants also commended the hospitality they received during their stay over the two days.
at December 14, 2014