There are some people who sit and talk about the problems which are out there, and then there are some who actually go out and do something about it. The latter are the people the English Department honours us with for our guest lectures. The class of English Honours 2015 started the session on Friday by watching a documentary prepared by Ms. Priya Ramasubban, the guest lecturer for the day. The documentary introduced the class to Kaikondarahalli Lake and the struggles as well as success of the project initiated by a small group of individuals in saving the lake. What really shook the class was the fact that an interdisciplinary group of common people could accomplish so much. More than that, it restored their faith in the government and administrative systems to a large extent, as posing a possible solution seems to go a long way in garnering support instead of just discussing problems. 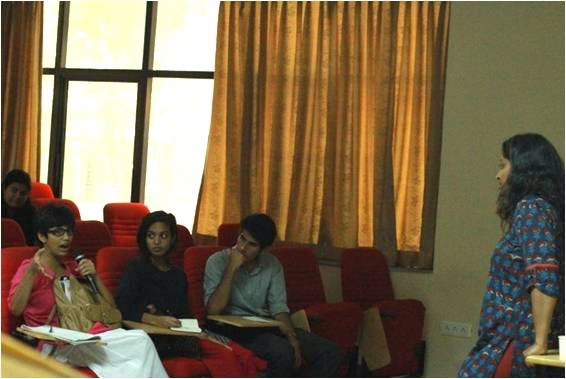 Ms. PriyaRamasubban spoke to the class briefly about her experience in saving the lake. What students really appreciated about Priya was how she could suggest a possible way of countering every problem they posed, as opposed to just a theoretical framework for looking at it in a different way. Priya also told the students that she could get them connected to the local officials if they needed any support and they could always get in touch with her for a discussion or possible strategies. That really struck a chord with them, as it is a common concern if just being sensitized or aware can prompt action, a concern also voiced by Prof. Padmakumar in his classroom discussions, who believes that awareness does not always translate to action. Priya also spoke about how the simplest of thoughts are the starting points for bigger changes, the smallest things which bother or annoy each person can go a long way in changing a situation if one chooses to stay with it long enough. She emphasized how indulging in a little bit of madness everyday should work, and this helped alleviate the common fear that the cause would control one’s life and leave the person too busy for any personal commitments. The lecture was very fun and informal, peppered with humour and intense discussions where the students were made to feel really comfortable with their concerns, no matter how seemingly trivial they might have appeared.
at September 25, 2014