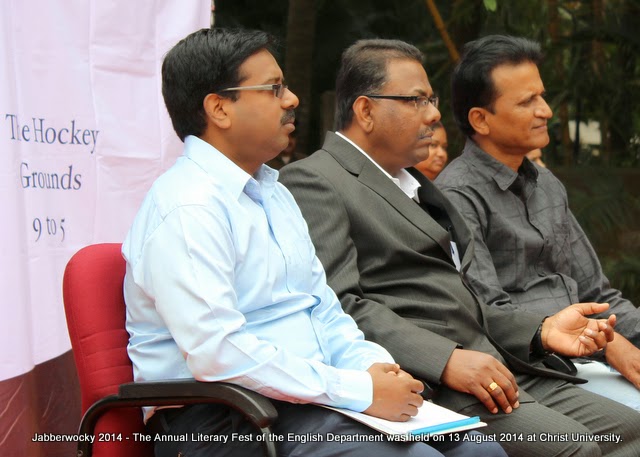 It has been 450 years since William Shakespeare’s birth, but his saga lives on...and quite literally, at that! The works of the iconic playwright came alive at Christ University on 13 August 2014, Wednesday, for their annual English Literary Carnival, Jabberwocky. The fest, which is a carnival of sorts, is known for its tidal wave of creativity and fun, but this year saw the exploration of new levels of artistry, with the theme ‘Shakespeare’, in commemoration of his 450th birth anniversary. Indeed, all the University’s a stage - and the students merely players!

This year’s topics were some of his classic plays, such as The Tempest, Othello, Macbeth, Twelfth Night, Mid-Summer Night’s Dream, Julius Caesar, The Merchant of Venice, Anthony and Cleopatra, Henry IV, As you like it, Richard II and Romeo and Juliet. Each of the twelve classes had to put up a stall on the play chosen by them and they had to focus on the stagecraft in Shakespeare’s play, Social, Cultural and Historical Context of the play, modern retellings of the play etc .

The day was marked by the presence of Chief Guests, Mr Elango, HoD, Department of English, The American College, Madurai and Mr Saad Khan, a filmmaker. They visited each of the stalls, interacted with the students and marked the stalls on Research, Presentation, Interactive games, Conceptualizing and Interpretation and Visualizing.While all the stalls were terrific in their own right, some stalls were the undeniable highlights.

Events were conducted through the day for the students. The events conducted were Quiz, Spoof, Card Game, Painting, Costume Parade and Soliloquy. Shakespeare Spoofs was the crowd puller that featured the most rib-tickling spoofs. The Soliloquies were awe-inspiring, with some incredible talents being spotlit. The Costume Parade got the crowd yelling in delight, what with students strutting around, bringing the 16th century to life with their archaic makeover.


In all, Jabberwocky was a smashing fete that literally did take literature to the next level this year, by celebrating the legendary playwright in the coolest of ways. With the kind of literary creativity and artistry conjured up this year, the Bard himself would’ve been proud!
at September 22, 2014