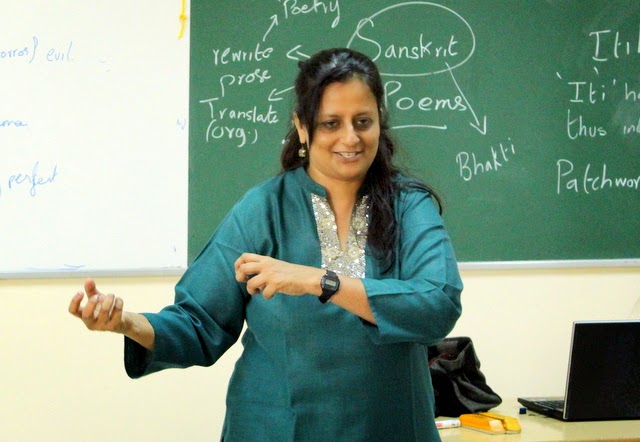 A lecture on Revisiting Indian Epics was held for the Honours in English Studies as well as 3 MA English students in Room no. 613 in the Central Block of the University on Saturday, the 5th of July with Prof. Gaana J. of the English Department as the facilitator. The speaker was Dr. Meera Baindur, Associate professor, MCPH, Manipal University.

The Mahabharata, Ramayana and the characters in them are household names for almost every Indian. In this, Dr. Meera Baindur was no exception. However, her interest in the epics led her to read the Sanskrit classical versions. After the brief introduction to her engagement with the epics, Dr. Baindur spoke about the difference between an Itihasa and a Purana. ‘Iti’ ‘ha’ ‘asa’ literally translates to ‘thus indeed (it) was whereas a Purana means old/ revealed. Till sixth century, the epics were transmitted through oral literature. The Indian Epics are so intertwined with Indian culture that they are seen as history by many while others see them as texts. During recitation, any one mistake can get repeated across every retelling.

Dr. Baindur related how critical editions are not ‘original’ as such, but work through a system of elimination across varying accounts taken from different geographical regions and specific to culture indigenous to said regions. Again, she reiterated the fact that most of our history and culture is lost to the ravages of time due to its oral nature. Because the folktales and other stories as such can be modified according to the situations in which they are spoken, in order to suit the speaker’s needs, one is faced with multiple versions not quite knowing what ‘really’ happened. To emphasize this point and engage the listeners in an active discussion, Meera asked each student to write the plotline of the Ramayana in five sentences, in any manner they chose. A couple of students read out their versions and this led to a discussion about the nature of retellings itself.

In the next part of the lecture, Dr. Baindur spoke about the diachronic study of an epic as opposed to an episodic study of the same. It was noted that the Ramayana gives importance to specific characters and characterization whereas the Mahabharata focuses on situations and how the characters react to them. She then spoke about the various retellings written in regional texts such as those by Pampa and Kamban. These are examples of how the bhashas assert themselves and make their presence felt by legitimizing their kingdoms, their cultures or their very existence. In particular, this can be the legitimization of a landscape history like Hampi or Jaisalmer or a socio-political problem like the hijra community’s need for political justice. Such usage across time is what can canonize even versions of the epics.

After a short break, the final session of the lecture commenced, which comprised mainly of slides with pictures that Meera had taken during her visit to the Angkor Vat temple in Cambodia. The pictures were not only aesthetically pleasing, but were so intricately carved as to have many meta narratives within one mega narrative, if one were to look closely. The session ended with a Pravachana by the speaker, a unique performative tradition where the speaker enacts one incident from the epic and the audience participates with questions and exclamations of anger, sorrow, joy, wonder and so on. Meera chose the incident where Rama asks Lakshmana to leave Sita in the forest and ended her Pravachana with the silent goodbye between Sita and Lakshmana, leaving the students with a sense of awe that comes with the realization that there is so much yet unseen.
at September 25, 2014